Given the Olympic fever and Michael Phelps becoming the most decorated Olympian in history it only seems appropriate that I would draw on a sports metaphor to help a client get grounded. 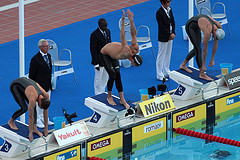 My coaching client has been struggling with some managerial roles lately. He is getting frustrated that his progress isn’t linear. Meaning he isn’t seeing direct, straight-forward, one foot in front of the other, upwardly climbing progress.

First I had to give him permission to let go of that concept. Improvement is never just forward, especially when you’re dealing with people. The fact that he has been able to even see some of the minor success and positive progress is for this client huge.

In the middle of our session I go off topic and interject with asking him how his backhand on his tennis game is. I saw a hint of instant frustration flash across his face cause he was trying to tell me about his lack of progress at work. 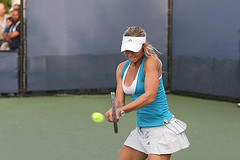 Then, there it was a huge smile started forming across his face and he started shaking his head as I went in to ask the next question. How many times do you have to practice your backhand shot to improve it? He said “I see it, Thanks. I get it now I have to practice the skills I want to improve at work.” He went on to say, “I have to look for the improvement not the shot that went out of bounds. Or focus on how the opponent keeps hitting to my backhand.” Each time your opponent hits to your backhand, You get stronger.

My approach to coaching is to listen to what someone is struggling with and then help him or her see the same thing through a different lens. Allowing them to bring it back home to what we are talking about. I’m flying a little high myself feeling like I just won a Gold medal as I sit here in my office in front of my computer screen in Kansas City MO as my client is rushing off to work in Irvine CA.