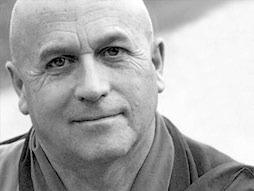 Sometimes called the "happiest man in the world," Matthieu Ricard is a Buddhist monk, author and photographer.Why you should listen to him: After training in biochemistry at the Institute Pasteur, Matthieu Ricard left science behind to move to the Himalayas and become a Buddhist monk — and to pursue happiness, both at a basic human level and as a subject of inquiry. Achieving happiness, he has come to believe, requires the same kind of effort and mind training that any other serious pursuit involves.

His deep and scientifically tinged reflections on happiness and Buddhism have turned into several books, including The Quantum and the Lotus: A Journey to the Frontiers Where Science and Buddhism Meet. At the same time, he also makes sensitive and jaw-droppingly gorgeous photographs of his beloved Tibet and the spiritual hermitage where he lives and works on humanitarian projects.

His latest book on happiness is Happiness: A Guide to Developing Life’s Most Important Skill; his latest book of photographs is Tibet: An Inner Journey.

"Matthieu Ricard, French translator and right-hand man for the Dalai Lama, has been the subject of intensive clinical tests at the University of Wisconsin, as a result of which he is frequently described as the happiest man in the world."